Lowresbuntu is a system to be installed on your smart phone! Well, not really. Rather it is a simulation of a GUI (graphical user interface) grown out of proportions. The result of such a transformatin is a very self-centric system – most of the display “real-estate” is occupied by knobs, buttons and other control levers of the system itself. Subsequently, user data – documents, images and applications simply have no place there; User data becomes suppressed by the Interface.

Instead of letting you work with your content Lowresbuntu insists on providing the Interface; all despite the fact of it [the Interface] being useless when there is no content to work with. The system which originally was created to support productive workflow of its user, turns into a narcissistic Domina.

Lowresebuntu demonstrates and ridicules the tendency observed in contemporary User Interface design when the level of abstraction reaches a point at which the Interface fails to enhance usability; instead it patronizes its user, often to the degree of prevailing over the user’s desires. 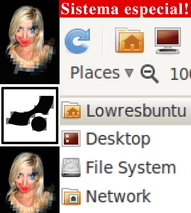