Rebuntu is an illustration of a system making decisions by itself, committing to self-maintenance and self-destruction. The system is continuously reloading a copy of itself within itself until the memory runs out. When no free memory is left the system needs to decide which one of the copies of itself it shall kill in order to reproduce itself again, again and again…

Rebuntu is an OS intervention. Its rather ironic tone sets an accent on the fact that machines and Operating Systems are incapable of “rational” or “human-like” thinking and thus shall not be ultimately relied on. 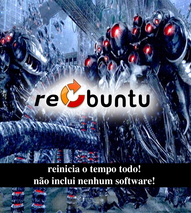